At the edge of the world in pursuit of ship safety

Joonas Lehtovaara
Published: 20.6.2019
What is it like to go to the Antarctic on business? At the end of 2018, Lu Liangliang left for a hundred-day voyage to find out.

Every year, researchers from Aalto University board the S.A. Agulhas II on one of its voyages to resupply South African research stations in the Antarctic. They make the trip in order to collect data with the ship's sensors, which record the physical forces that act on the ship's hull. These trips are made possible by collaboration with Stellenbosch University, which has continued since 2012.

At the end of 2018, Aalto University's latest representative to the Antarctic was Lu Liangliang, a doctoral student with the Marine and Arctic Technology research group. 'This year was special,' Lu says. 'Agulhas II was chartered by the Weddell Sea Expedition, which would take the ship on a longer route than in previous years, allowing us to collect more data from different ice conditions.'

Aalto University's ties to the Antarctic begin at the shipyard where Agulhas II was built. The ship was completed in 2012. Pentti Kujala was part of the team that designed the load-measuring instruments for the ship, usually used for measuring ice loads, as Agulhas II is an ice-breaking ship. Today, Kujala is a Professor of Practice and a vice dean at the Aalto University School of Engineering as well as the supervisor of Lu's doctoral studies.

‘Going to the Antarctic provides us with an annually growing data set that fuels the work of our research group back here in Finland, supporting the research we conduct into ice-going polar vessels, for example. It’s also a great opportunity for one of our younger researchers to experience polar conditions firsthand,’ Kujala says.

In addition to the sensors that measure ice loads, the ship carried three camera systems to help study the thickness and breaking patterns of the ice as well as the general ice conditions the ship encountered. Ice load data could be transferred during the expedition, but visual data from the camera systems – totalling roughly 40 terabytes by the journey's end – had to be transported back to Finland on physical storage disks.

To the cold south

Agulhas II departed Cape Town on 6 December 2018. It would take 12 days for the ship to reach the Antarctic.

Those twelve days were already enough to dwarf Lu's previous sailing experience. 'I was seasick by the second day,' he says. It was not due to particularly rough waters, however, as Lu was on his laptop, working on a paper. The ship's movements and staring at a computer screen combined to induce motion sickness.

In general, Lu didn't mind the long periods of sailing, as he was busy preparing equipment and getting to know his fellow scientists.

The first iceberg sighting caused a wave of excitement among the members of the expedition, as it was a sign that they were nearing the end of the first leg of the trip. The novelty of seeing icebergs doesn't last long when travelling to the Antarctic, however.

The expedition reached the Antarctic and stopped at Penguin Bukta, which is a location used to load and unload ships that come to resupply South Africa's nearby research station. This time, Agulhas II stayed until the end of the year to wait for the Weddell Sea Expedition team to assemble.

Studying ice on the Weddell Sea

Weddell Sea Expedition 2019 officially began on the third day of the new year as Agulhas II departed Penguin Bukta and headed west to the Weddell Sea. Their destination was the Larsen C ice shelf and iceberg A68, which calved from the ice shelf in 2017. A68 is one of the largest icebergs on record: at 5 800 km2, it is twice the size of Luxembourg.

Once at their destination, the expedition's scientific programme began. Researchers on the expedition represented a variety of disciplines, from marine biology and oceanography to sea ice research and glaciology, and the ship was accordingly loaded with a variety of instruments. 'I didn't know what a CTD was before the trip, but I do now', Lu says with a laugh, referring to the device used to measure the conductivity, temperature and depth of water.

'Our work on the expedition involved two themes: the ship itself and the properties of sea ice. These are the two main interests of the Arctic and Marine Technology research group. We have to know the ice so that we can make sure the ships are safe.'

The first theme could be explored from the relative comfort of the ship, but to learn about the ice itself, the team had to enter the Antarctic environment. Ice samples were either drilled manually from ice floes or fished out of the sea, then stored in the ship's freezer for further study. Temperatures of drilled ice cores were measured immediately after extraction, while tests on the ship would deal with their salinity, density and even flexure strength.

Fairly simple procedures like ice coring may prove surprisingly difficult in an environment as challenging as the Antarctic. On one occasion, the ship's captain barred the team from landing on a floe due to deteriorating ice conditions, while on another, the ice corer got stuck and froze in its borehole before the team could pull it out.

In addition to studying ice as a material, Lu and his fellow researchers studied ice as an environment.

'To measure sea ice thickness, floe size and ice concentration, we use both machine vision and human vision,' Lu says. A semi-automatic machine-vision system involved an algorithm that uses the feed from the stereo camera mounted on the starboard side of the ship to determine the thickness of an ice floe.

Human vision refers to an around-the-clock watch that operated while the ship was moving in ice, with the observer recording ice thickness with the help of a yardstick on the port side. 'You really need to focus, especially if the ice conditions change a lot,' Lu notes.

The ice monitoring was handled by Lu and two students from Stellenbosch University, rotating first in two-hour and later in four-hour shifts. A fourth observer joined the rotation later, though that still meant six hours of ice observation per day.

'Looking at that kind of view, with the ice and icebergs, it makes you think differently. Of course, you also start to miss people.'

One of the chief aims of the voyage for the Weddell Sea Expedition team was to find the wreck of the Endurance. British polar explorer Ernest Shackleton had enlisted the ship for his 1914 expedition to cross the Antarctic continent, but his voyage was cut short when Endurance got stuck in ice and sank in the Weddell Sea ice before Shackleton even reached solid ground.

The location of the wreck site had been plotted more than a hundred years ago by the captain of Endurance, but this expedition was the first attempt at finding the wreck underwater.

The search ran into trouble before it could even begin, as the expedition had to make an unscheduled visit to a research station on King George Island, as one of the expedition's underwater vehicles had been damaged earlier and required spare parts and repair.

Weather conditions prevented the delivery of the needed parts, however, and the expedition carried on with one submersible fewer than planned.

Travelling to the wreck site meant breaking through a lot of ice. On previous legs of the voyage the expedition tried to avoid the ice to sail faster, but now they had no choice but to go through it. The pace of Agulhas II might have slowed down, but Lu found a silver lining – all that ice breaking against the ship's hull meant a wealth of data.

'When we first got far into the Weddell Sea, I was surprised to see how many animals there were. I had expected the area to be a kind of white desert. But there are a lot of seals. Sometimes hundreds of seals, just lying there,' Lu recalls.

Ice conditions remained difficult after the wreck site was reached. Further misfortune was to come: connection was lost with the autonomous underwater vehicle (AUV) sent to look for the wreck.

Faced with a missing AUV and worsening conditions that threatened to leave Agulhas II stuck in ice, the search was called off. The AUV might have found the wreck, but now it too was lost to the expedition.

See the route taken by Weddell Sea Expedition 2019 below. 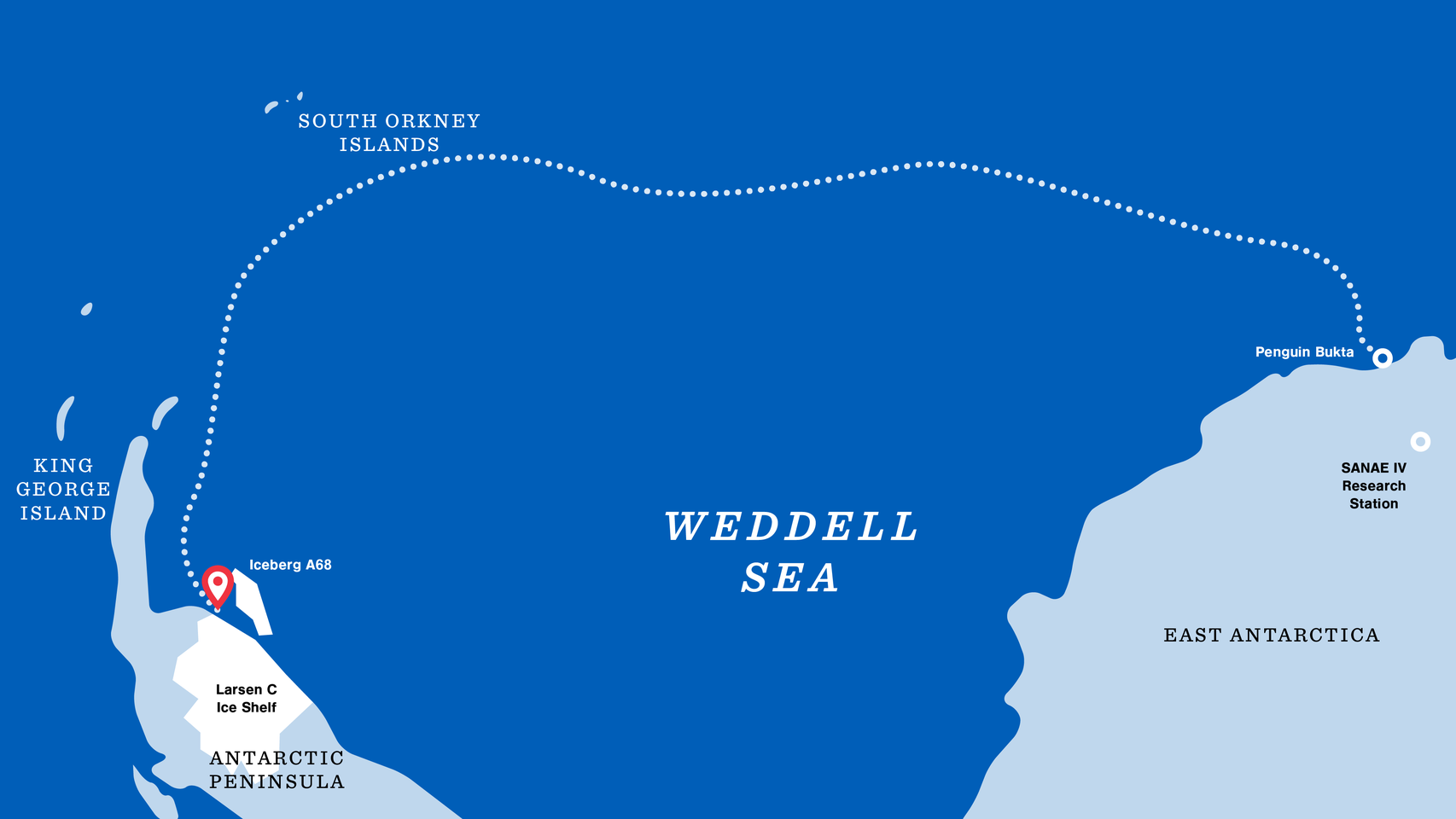 Lu Liangliang arrives at Penguin Bukta on the Agulhas II. Penguin Bukta is a location used for resupplying the South African research station SANAE IV and the place from which the expedition would launch.

Once the full expedition crew has boarded the ship, Weddell Sea Expedition 2019 begins with a trip to the waters between the Larsen C Ice Shelf and iceberg A68. The ship would remain in the area for two weeks, during which the expedition's scientific programme was conducted. 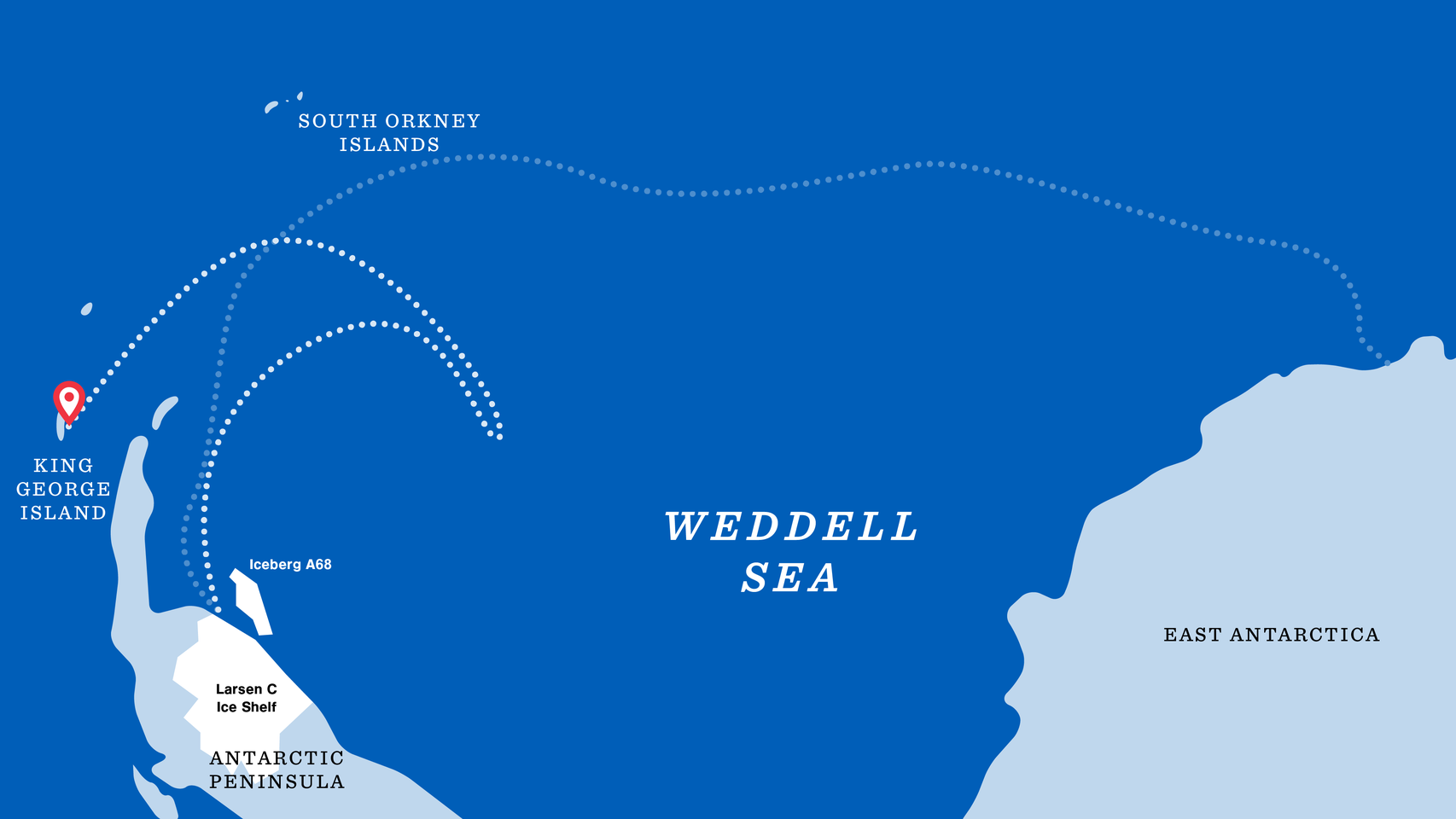 Damage to one of the expedition's remote-operated vehicles (ROV) is discovered on the way to the Endurance's wreck site and Agulhas II is forced to turn back towards King George Island to wait for repair supplies to be delivered. 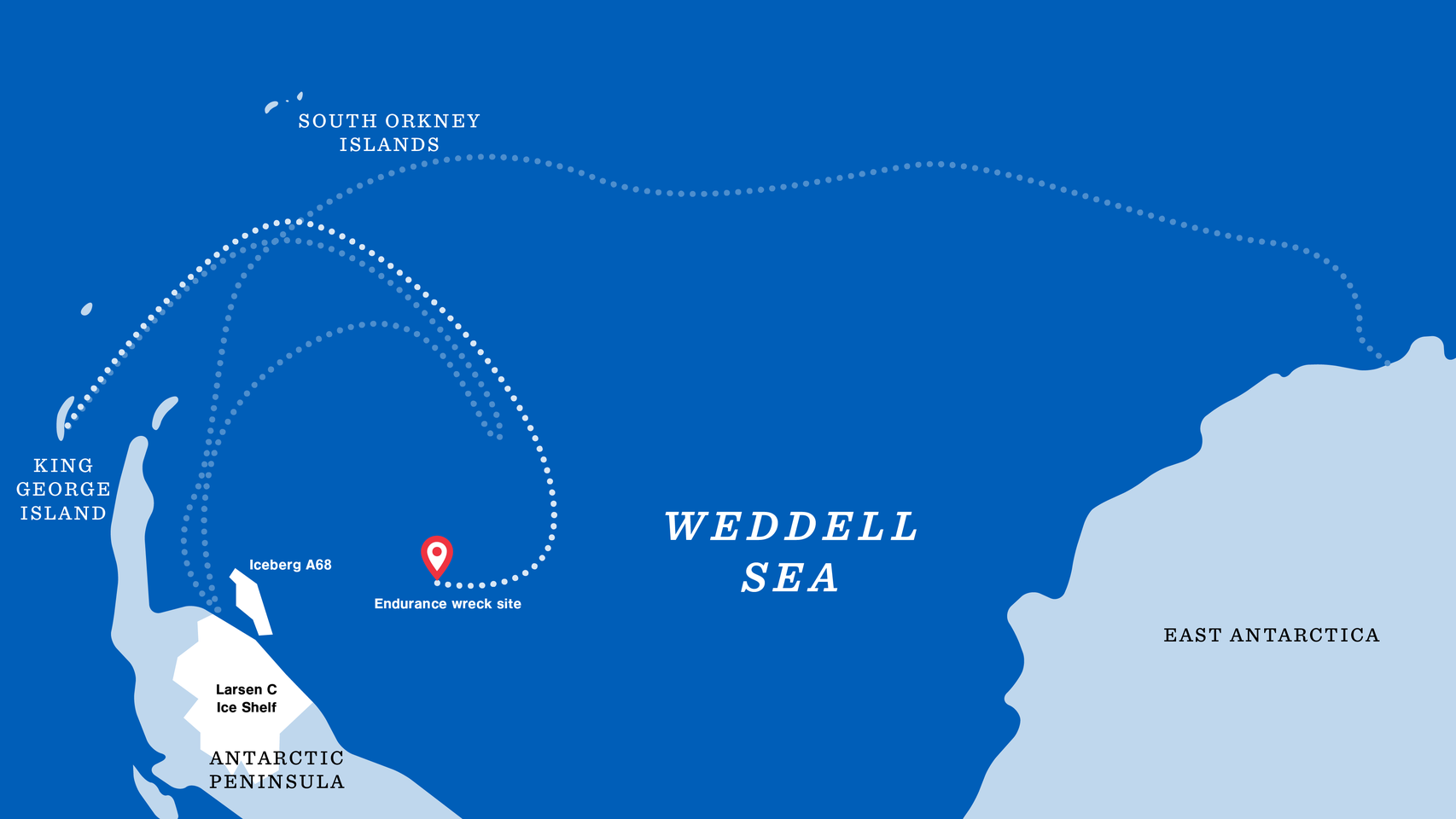 After several attempts aborted due to difficult weather, the airborne resupply from Chile is cancelled and the expedition proceeds to Endurance's wreck site with a single operational ROV. 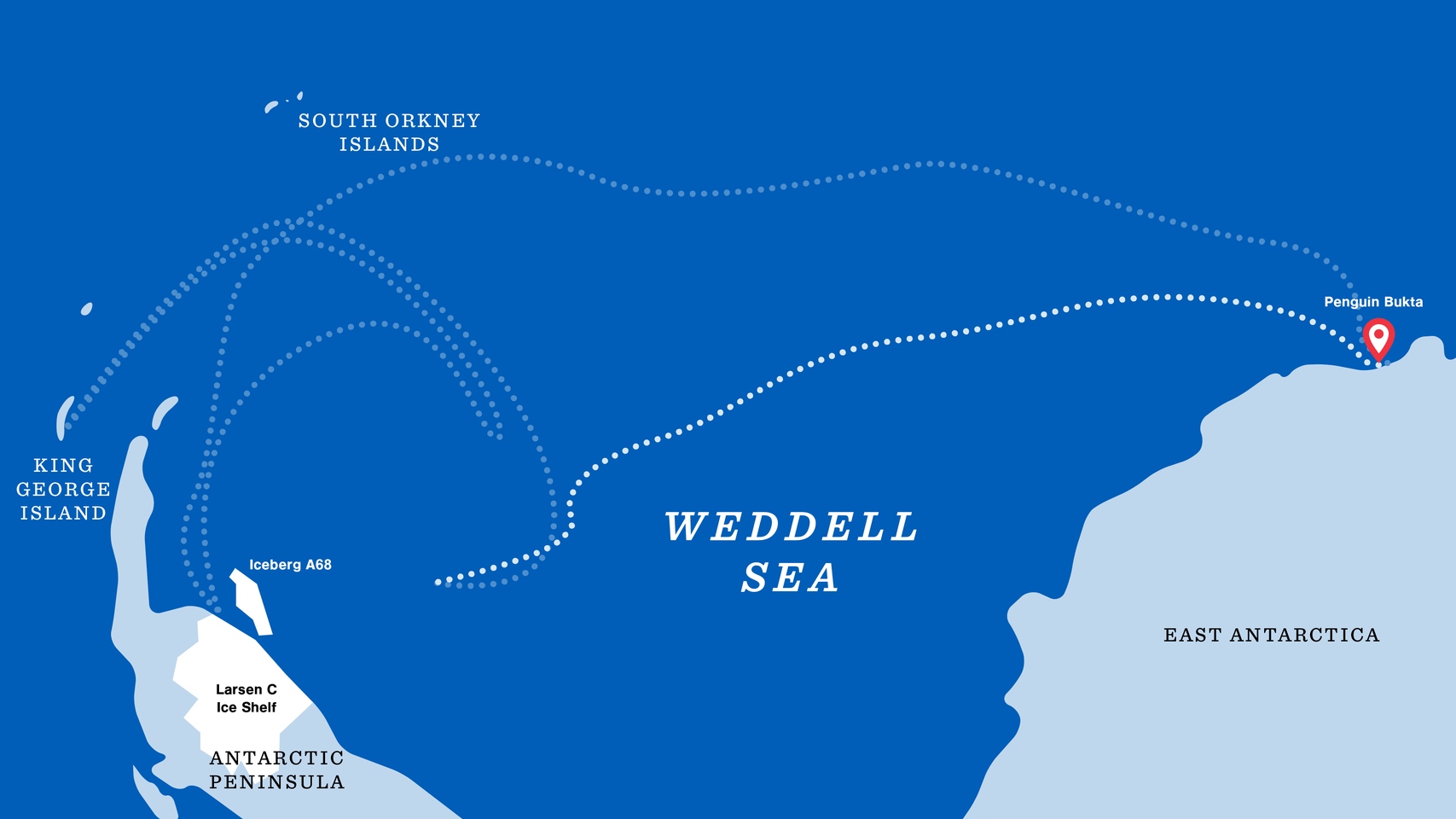 Hampered by a tight schedule, technical problems and severe weather, the expedition abandons the hunt for Endurance and leaves the wreck site to return to Penguin Bukta and from there back to South Africa.

With the search over, the end of the expedition was in sight. The ship headed back across the Weddell Sea once more to make a stop at the South African research station before sailing for Cape Town. After nearly a hundred days of travelling, the crew once again erupted into cheers as the city lights first came into view.

Despite some difficulties, Lu considers the voyage a success. Thanks to the Weddell Sea Expedition, the ship's instruments recorded a much larger and more diverse set of data compared to previous years, when the ship only sailed to the South African Antarctic base. 'This time, we encountered more stronger ice, multi-year ice. From previous years, we mostly had data on younger ice,' he explains

The research group has been working with the data set for several years, but the latest additions together with further study should provide deeper insights.

In 2019, another Aalto University researcher will board Agulhas II on one of its voyages to the Antarctic. The task usually falls to a doctoral student whose work focuses on ice loads or ice conditions.

Given the chance, would Lu return to Antarctica? He considers for a beat before replying. 'Yeah, I think so.'

Learn more about marine and arctic research at Aalto University or find out more about Lu Liangliang's experiences through the reports he wrote during the trip.

We focus on the behaviour of ships and structures in normal and extreme environments. We do our research by considering the safety of maritime transportation, as well as the experiences the marine environment can offer to cruise vessel passengers.

Voyage to Antarctica: World of ice

Part 1 of 3. Lu Liangliang checks in from aboard the SA Agulhas II after departing Cape Town for Antarctica.

Voyage to Antarctica: From Penguin Bukta to Larsen C

Part 2 of 3. Lu Liangliang reports from the Antarctic at the beginning of the new year.

Part 3 of 3. Lu Liangliang files his final report from the Antarctic before returning to Finland.